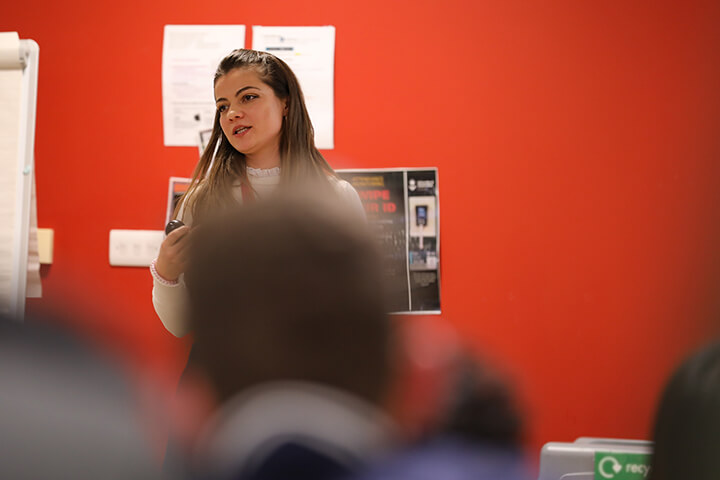 At the University of Sunderland in London, we’re proud to have a diverse and talented community of staff and students. To mark International Women’s Day, we invited some of the members of that community to tell us about the women that have inspired them.

Because of the huge number of people that wanted to tell us about the women that have inspired them, we’ve decided to split this article into two parts. You can read Part Two in our News pages now.

The women who led the Ford sewing machinists strike of 1968 have been a great inspiration. They were a group of working-class women from my home town of Dagenham, who were able to find their voice and bravely instigate industrial action when they discovered they were being paid less than male staff undertaking work of equal complexity. Their courage, tenacity and stand against the status quo ultimately resulted in the passing of the Equal Pay Act 1970 which benefits working women, and men, to this day. They have my gratitude.

“Since I was a child, I’ve been so impressed by Joan of Arc. She was one of the world’s most famous military leaders, an important historical figure, a national heroine and French Catholic saint. She was a symbol of unity, a great leader of the French army who helped boost morale during the Hundred Year’s War without any military training.”

“The woman I find inspirational is Queen Amina Mohamud (1533 - 1610). She was born in Nigeria, Africa to King Nikatau and Queen Torunku of the State of Zaria and was among the few warriors who ruled a kingdom in Africa, which she did for 34 years. Her grandfather was the one who discovered that she had leadership skills, allowing her to attend meetings of state. She achieved various things when she became Queen. She’s known for removing obstacles to allow trade with the Atlantic Coast and expanding her territory by personally leading military expeditions with about 20,000 men in numerous battles. I admire this woman because she was an accomplished warrior who gave safety to her people, improving their wealth and power. I also admire her because of her leadership skills. She was personally involved in every war she waged and was never defeated.”

"She instilled in me the strength to carry on when it gets tough, to keep my mind open, be independent, tolerant, empathetic and non-judgmental of others." - Ilona Lewicka - HR Manager

“There are, and have been in the past, so many women that have inspired me. But there is one constant figure that has had a huge influence over me - my mum Maria. I have to admit, I appreciate her more the older I get (funny that!). I can recognise more and more how she shaped me into a woman I am now. Having four kids, a full-time job as a teacher, my dad and her parents to look after and doing it all at the same time makes her a legend in my eyes. We always had dinner on the table, clean clothes, my dad’s shirts were always ironed – yes, she came from a very traditional approach to male and female roles - and we were always looked after in every possible way. Now she’s close to her 75th birthday but she is still the strong woman that I admire. She learnt how to drive when she was 62, she’s been living by herself for over ten years now and despite health problems, she is determined to be self-sufficient. She’s always allowed me to have my own independent life. I’ve been able to make my own mistakes, but she’s always been there when I needed her. She instilled in me the strength to carry on when it gets tough, to keep my mind open, be independent, tolerant, empathetic and non-judgmental of others.”

“Oprah Winfrey is ambitious, hardworking, confident, motivator and the first black woman billionaire. She inspires and has inspired me because of where and how her life began and where she has gotten to. From a talk show host, media executive, business entrepreneur to actor and philanthropist. It makes me feel that, if Oprah Winfrey can do it alone, every woman whether black or white can do it without depending on any man.”

One truly inspiring woman is Milly Theale from Henry James’ novel The Wings of the Dove. When Milly falls in love with Merton, she is unaware he is secretly engaged to her friend Kate, but they are hiding their relationship because Kate fears she will be disinherited. After chance steps in and Kate finds out Milly is suffering from an incurable disease, she conjures up a plan for Merton to seduce her so that she can leave him all her money. I find Milly deeply inspiring as it takes enormous strength to remain kind and noble in cruel situations and rise above heart-breaking personal betrayal. And what can be more powerful than selfless love and the act of forgiveness, especially when these come from a vulnerable and terminally ill woman?

“It’s quite hard to pick only one woman that I find inspiring, regardless of whether she’s modern, historical or unknown to most people. I truly believe every woman is inspiring in her own way. They face millions of obstacles every day but they always somehow manage to look confident, strong and happy. If I had to choose just one woman out of all that inspires me, it would have to be Princess Diana. That’s because, even though she married into the Royal Family, she didn’t just choose to live a carefree life. She used everything she has to help people in need around the world.”

I’m inspired by Marie Curie. She was an amazing scientist who achieved fame due to her discovery of Polonium and Radium. In the times when women did not share the same privileges as men, to have the courage to follow her passion and succeed is a lesson for women in all time periods - past and present. She won the Nobel Prize twice and was a great role model for her daughter Iréne who also received a Nobel prize. Marie Curie sadly died due to prolonged exposure to radium which is now an integral part of modern cancer treatment. She gave her own life for the cause of humanity.

The women of the University of Sunderland in London are inspiring in their own right. Let us know about the women who have inspired you following #WeAreSunLon on Facebook, Twitter and Instagram..

You can read Part Two of The Women Who Inspire Us in our News pages.

How can hobbies support your career?

Did you know that hobbies can help you get a job? The Careers and Employability team at the University of Sunderland in London certainly do. In their latest article, they tells us how you can use the things you're passionate about to make sure you have a brilliant work life.

Part two of our series looking at the women who have inspired our staff and students, in celebration of International Women's Day.

Thinking, or cognitive, biases can be explained as the mistakes we make in our reasoning. They come about when we misinterpret information we’re given in some way. Knowing about the different kinds of biases and the ways they can affect your thinking are important when writing brilliant essays that get your top marks.

This week the Health and Wellbeing team are talking about World Mental Health Day and its theme: Movement. Find out how exercise, or even just moving your body, can have a huge impact on how you feel.