Our dedication to equal pay

The University is committed to the principle of equal pay for work of equal value. This belief is why we were one of the first universities in the country to introduce an Equal Pay Policy.

We also publish Equality, Diversity and Social Responsibility reports every year, describing the activities and initiatives we're involved in that celebrate and promote diversity.

Since 2003, the University has carried out an annual Equal Pay Audit and have been cited by the Equality and Human Rights Commission. This has helped us meet our aims of fairly rewarding staff, becoming more efficient and growing our reputation.

In 2017, the Government introduced a new requirement for organisations like the University of Sunderland in London to report their Gender Pay Gap. This standard approach across all companies is slightly different from the one we've used in the past - it includes a wider group of staff such as casual workers, fee and expense claimant, and different pay elements.

What this means is that our Gender Pay Gap has been worked out slightly differently since 2017. But it can still be compared with the data from previous years.

Read the Government's guidance and definitions or visit their website for Gender Pay Gap Data.

Throughout our grading structure, women are well-represented, including in our most senior academic, professional and leadership roles. This can be seen by our Mean Gender Pay Gap of 13.5%, which is much better than the pay gap of the wider UK workforce. 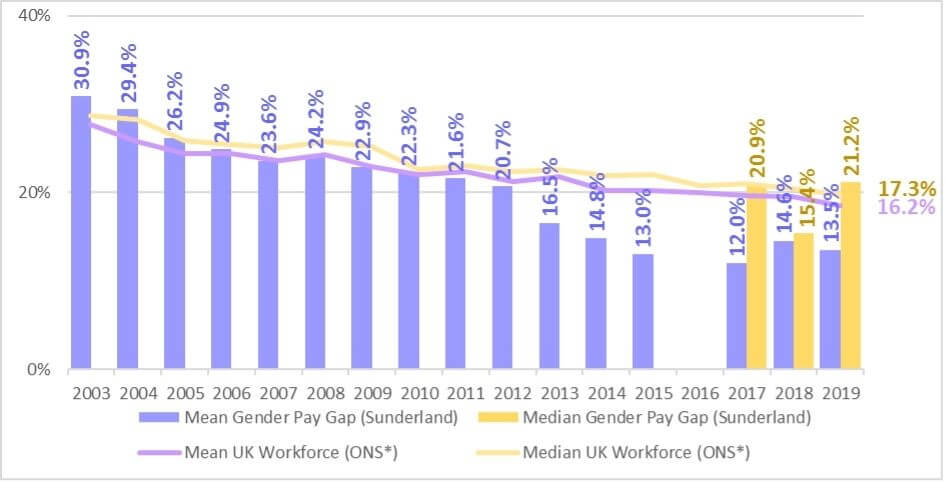 You can work out the median pay gap by separating all women and men into two imaginary lines in order of how much they get paid. Then, you compare the rate of pay for the middle man with the middle woman in each line.

Our Median Gender Pay Gap is 15.4%, which shows a positive representation of women across our pay structure. It also indicates that there are some part-time roles at the lower end of the pay structure which are mostly filled by women.

Take a look at our Equality, Diversity and Social Responsibility annual reports. It's also worth reading about the Government's website for Gender Pay Gap data.

The below histogram shows the hourly rate of pay compared to the number of staff for women and men. You can see that the two lines are similar in shape, with a gradual rise in the rate of pay along the line of the lower-paid staff and a sharp increase in for the highest-paid staff. But, the line for women is longer and rises more slowly so the median woman has a lower rate of pay than the median man. 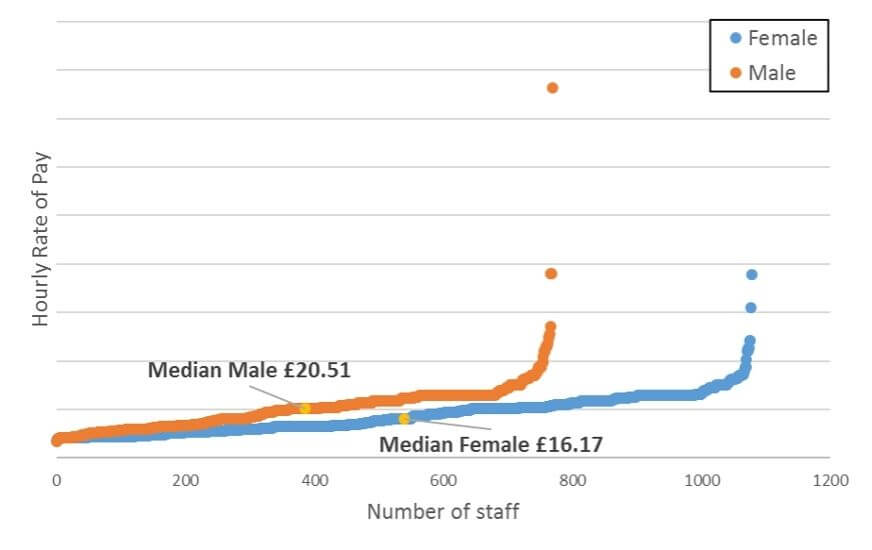 Our Media Gender Pay of 21.2% partly reflects the fact that there are some roles at the lower end of our pay structure that tend to be filled by women. In the below chart, the types of role are sorted from highest to lowest average hourly rate. The higher-paid roles are filled by men and women roughly equally, while the lowest-paid positions are taken by women.

The bar chart shows the proportion of men and women in similar types of role, with the highest-paid at the top. The median woman is in the Other Support £15 to £20 per hour group, while the median man is in the next highest group - Academic Tutors. 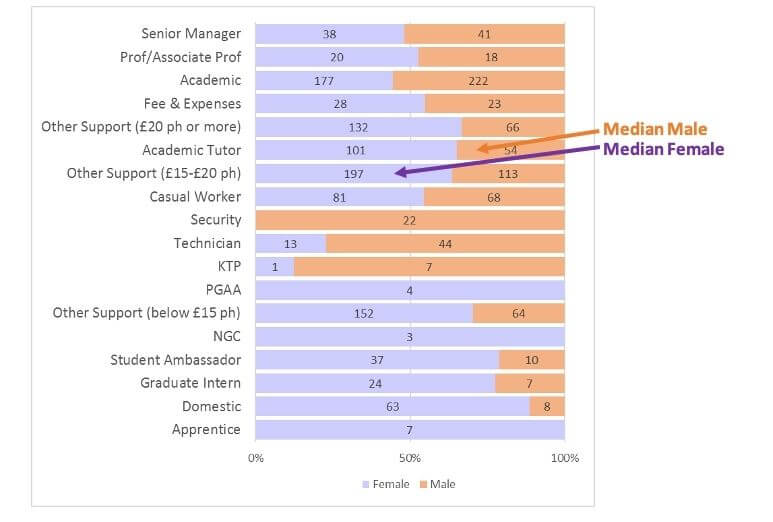 Chart 3: Staff numbers by type of role in the 2019 pay gap analysis 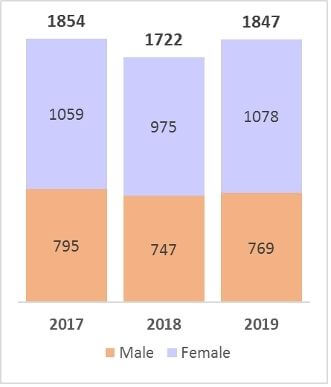 The UK Government requires all organisations to rank their staff according to pay and split them into four equal parts called quartiles.

We then have to publish what proportion of each quartile is female or male.

You can see the data for the quartiles in the graph below. Each of the bars represents one quartile, split into men and women. The lowest quartile is 69% women, lower-middle is 61% women, the upper-middle is 56% women, and the highest is 47% women. 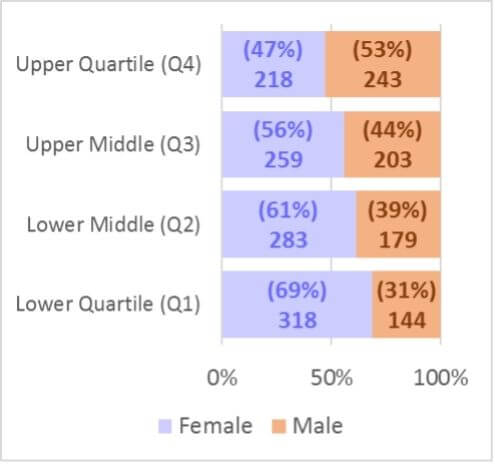 Although the Government requires us to specify the pay gap in any bonuses (including Long Service Awards), the number of people who receive this is very small.

Only 0.9% of males (seven people) and 0.3% of females (three individuals) were given a bonus in the 12 months to 31 March 2019, which is considered statistically insignificant.

At the University of Sunderland in London we know that the world is becoming ever more reliant on our screens. That changing reality is even more true for students who are writing their assignments, reading articles and even talking with their lecturers through laptops and mobile phones.

Over the course of the last year and several months, we’ve all become far more familiar with the use of technology when it comes to higher education. Due to the pandemic, much of the way you’ve lived your student lives has been online, through video streams and instant messenger chats.

Digital technology, and the ability to use it effectively, is essential for anyone hoping to reach their goals through studying at the University of Sunderland in London. That's why we've made sure our website is as accessible as possible through the ReciteMe tool. Learn all about it.