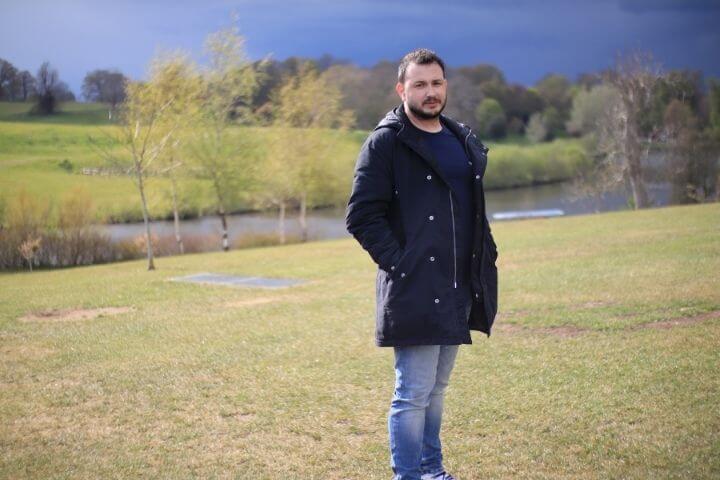 University of Sunderland in London graduate Mihai Mihalache has built a career on a combination of a love for film and photography and a passion for making the world a better place.

Together with Director and Producer Anna Audrien, he has been working on ‘Shadows’ a series of short films aimed at showing the issues around mental health in new and interesting ways.

The third movie in the trilogy, ‘Awakening’ is to be released soon and shows the struggles of addiction through dance.

Mihai discovered his interest in helping others during his time studying for his BA (Hons) Business and Management degree.

His class were asked to create a fundraising campaign for the Teenage Cancer Trust.

“It was really out of my comfort zone,” he told us, talking about the project he did with Sister Mary Owino. “But the more I worked on it, the more I realised that this thing wasn’t really about the grade for me. I was interested in giving back to people and helping those in need.”

This change in thinking had a big impact on the campaign, leading Mihai and his team to raise a significant amount for the charity for which they were recognised by the University at a lunch in their honour.

The experience sparked something in him too, a passion for spreading the word about some of society’s most vulnerable.

“As a photographer and producer, I have the chance to tell certain stories that can bring to light the struggles people go through.” Mihai Mihalache, BA (Hons) Business and Management

“I want to be a voice for the voiceless and show the world there is so much more we aren’t aware of. I want to bring to light the happy places as well as the seen and unseen struggles.

Life becomes this fast-moving train that can make us blind to what’s going on around us.

But I want to live my life according to the old saying, ‘the secret to living is giving.’ That means stopping and paying attention to other people.”

Talking about his work with Monocot Productions and Anna Audrien, Mihai explains, “At the time, I was a business director for a creative network agency. I knew Anna from some other work I’d done with her and heard she was trying to open her own production company.

Monocot’s values are very much in line with my own. I want to create films that have a purpose, to raise awareness on social issues through art.

One of those issues is mental health, which can be a very complex topic. Anyone that’s tried to explain it with words will know just how hard that is to do.

But dance, which is what we use in the film, is all about communicating your emotions. That’s why we asked our dancers to portray specific struggles with their bodies.

We want people to find themselves in those short videos and understand that they’re not alone.

Officially, Mihai’s job title is business director, but he sees his role as so much more than that.

“I’m a storyteller. We create worlds through film, photography, documentaries and more.

My specific role is all about looking after the organisation’s business goals and objectives.

I’m responsible for increasing revenue, finding and developing opportunities and growing our brand.

But I do all of that through the lens of creativity and art. So, in a way, business director is just a title.

The actual role is so much more.”

Looking into the future, Mihai is excited about continuing with the work he’s done for Monocot.

“I want to keep telling stories through my work and giving a voice to people who are afraid.

I’ve actually got quite a few projects going on at the moment. On top of finishing ‘Awakening’ I’m writing the fourth episode in the ‘Shadows’ trilogy around men’s mental health.

I’m also going to continue an older piece about ‘London’s Forgotten Crafts’ and a TV series which,” he says, “I’m not really allowed to say much more about right now.”

We end our chat discussing what advice he would give to students in the University of Sunderland in London community who are thinking about following in his footsteps.

“You need to discover your own path. Everyone has the power and abilities to become the person they want. The trick is finding the desire.

It can get scary sometimes, stepping out into the unknown. But remember, everything you’ve ever wanted is sitting on the other side of that feeling. Behind the fear is the person you want to be.”

You can find out more about Awakening and the other films in the Shadows series on the Monocot Productions website.

To explore the course Mihai studied at the University of Sunderland in London, visit BA (Hons) Business and Management.

If you've been affected by addiction or any other issue, please reach out to our Health and Wellbeing team.

You can speak with them confidentially by booking an appointment online.

Become a School Coordinator in London

The University of Sunderland Students’ Union is looking for a passionate, enthusiastic student to become our next London School Coordinator.

For over 30 years, Dr Gowri Shankar has worked for the Indian Government in everything from Civil Aviation to Food Processing.

A University of Sunderland in London student has won a £1,500 scholarship after completing the Santander Universities Black Inclusion Programme. Azeez Soaga, who is studying for his MSc in International Business Management, won the prize after completing the renowned course earlier this year.

We’re delighted to announce the winner of our latest prize draw for the Module Evaluation Survey.