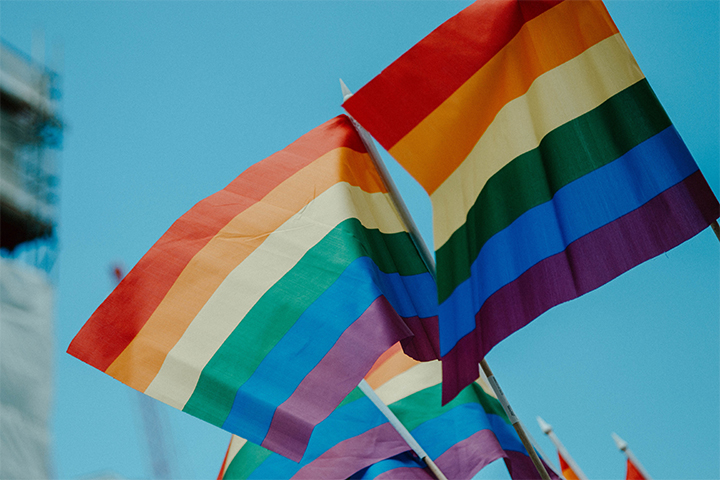 It’s LGBT History Month at the University of Sunderland in London and across the UK.

To celebrate, we’ve been taking a look at some of the key things that make up the annual commemoration of the contribution of lesbian, gay, bisexual and transgender people to our society.

Today, we wanted to talk about what it means to be an ally. Often, those who don’t identify as members of the LGBTQ+ community think that month is not for them.

While it’s true that the focus is on the lives, struggles and stories of queer people, it’s also important to recognise that straight people can be strong supporters of rights, as well as celebrate achievements, morn losses and work towards a more equal world.

That’s why we wanted to give you some ideas of the kinds of things you can do to make yourself an ally this LGBT History Month.

For a long time, queer voices in the UK have been pushed to the margins of society, ignored, ridiculed and persecuted.

Now, with the advent of a more modern and enlightened era in LGBTQ+ thought, members of the community are finally being heard.

As an ally, the best thing you can do to support this is to be a listener. Take what your queer friends say to you about their experience seriously.

Most importantly, if someone comes out to you let them lead the way. For many, coming out is an incredibly difficult experience, so follow their tone of voice - if they’re speaking casually it could be because they don’t want to make a big deal of it.

Also, it’s important to use the words LGBTQ+ people give themselves, especially in the case of transgender or gender-fluid people.

If you’re asked to refer to a person as she/her or he/him, do so without question and do not apply labels to someone unless they’ve told you them already.

Often we can have positive feelings towards people in the LGBTQ+ community without expressing that support vocally.

While you may not have considered it in the past, being a vocal advocate can mean a huge amount to the people you care about and create an environment that is more welcoming to all.

This month, why not wear a rainbow flag (as a pin or a sticker for example)? Talk about LGBTQ+ news with your friends and networks and ask questions.

The more we all do this, the more we build a community that is open to people from all different experiences in life, which helps us learn more about this world. That can only be a good thing.

Speak up against homophobia

Of course, underlying all of this is the fact for an incredibly long time in human history, homophobia has been the norm in society.

While that is changing and has been for many years now, there is still a persistent stream of it in all walks of life.

As an ally, you can do something about this. Stand up for people if you hear them experiencing homophobia, call homophobes out on social media.

Being aware and on the lookout is often the first step and can be eye-opening.

Homophobia comes in all shapes and sizes, from obvious abuse to more subtle discrimination that can include jokes or blocking LGBTQ+ people from involvement.

Of course, it’s also important to consider our own biases.

While you may think of yourself as an enlightened and positive individual if you don’t identify as queer you might not realise all the complexities which go along with that.

To combat this, it’s worth taking the time to examine your own unconscious thoughts using the Harvard Implicit Association Test.

Follow the link at the bottom of the page and select ‘Sexuality IAT’ or ‘Transgender IAT’ to get started.

If you have been affected by any of the issues raised in this article, whether you identify as a member of the LGBTQ+ community or an ally, get in touch with our Health and Wellbeing team.

This year, LGBT History Month is celebrating the theme of Politics in Art. With that in mind, we wanted to share with you some of the stories of amazing members of both the arts and LGBTQ+ communities and the impact they've had on our world.

Showing your love this Valentine’s Day

Valentine’s Day is a time to show some love, whether that’s treating your partner or getting together with your friends. While traditionally a celebration for couples, we thought why not use 14th February as an excuse to spread a little joy in the world.

The history of LGBT History Month

February is LGBT History Month in the UK, and we're taking a look at its origins. How did the annual celebration of queer culture come about and just why do we celebrate now when most of the world marks the occasion in October?